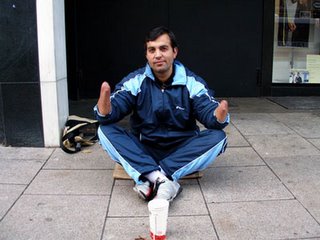 I was in Hamburg last November & I stayed in a city centre hotel. In the afternoon when I left the hotel & onto the main road right in the heart of the city, I immediately noticed a man sitting by the exit/entrance, begging for money. This man continually made a sort of howling sounds to attract attention to himself. The sounds he made were rather eerie & the sort that would & could create disturbing emotions, just like a bad nightmare & as if he didn’t have a tongue & couldn’t speak. One or two people dropped some change into his cup.

A non German family with a little boy were passing by. The beggar had obviously caught the attention of the little boy who was probably 5 or so years old. His father gave the boy a coin & the boy very very cautiously tiptoes towards the beggar whilst maintaining his eye contact. I think the boy was both curious, frightened & at the same time listening to his father who was encouraging him to approach the beggar & put the money in the cup. & so did the boy. As I passed him by, I wondered if I should have asked him to take a picture. But I didn’t. I thought about it for sometime afterwards.

The next morning, I left the hotel by the same exit & there he was again. So this time I approached him with my camera & a look & gesture that without saying a word transmitted the message that I wanted to take his picture as I held 2 Euros as an offering.

He smiled & agreed & I took two pictures. He could actually SPEAK!! When I talked to him, He said a work or two in English, a word or two in German. But I gathered that he was NOT German but from East Europe.

When I put my camera to my eye, without any form of encouragement from me, he lifted both his arms as if he knew what sort of picture I wanted! He “Posed”. I took the pictures & thanked him & he nodded in response. Once I was done, I noticed that a few girls had been standing behind me & watching the whole thing. I also noticed a few people who were passing by looking at me & looking at him. I couldn’t help but feel that some of the impressions were of disapproval & ghastly disgust. How can he take this poor man’s picture!!

But it all me think.

Who was taking advantage of who here!!

Who exploits who! If indeed that happens!!

Was I guilty of taking advantage of him by offering him money to take his picture? But then again, he was happy to take the money & he even posed for it!!!

May be it was a bit of both!! May be it didn’t warrant so much thinking. May be I do what I do & he does what he does. & may be that’s the way it works.

I wish him luck.